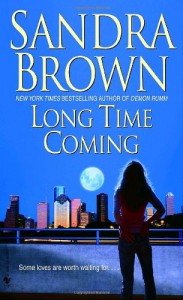 Long Time Coming by Sandra Brown
Marnie is raising a teenager and is working on an advertisement for a freelance job when the astronaut comes to her house and wants to know why she's been sending him letters that he's the father of her child. They had met back 14 years ago one summer when their families summered at the beach. Law had gone out a few times with her sister and
she did have a baby, David later dying in a car crash. That's how got to raise her sister's child. Her mother was in a local nursing home and the expenses were adding up.
He spends time in the area to get to know his son and her, he would've remembered making love to her.
After the test he does confess to her that he is the father and they need to talk more.
He finds out a lot more when he looks through the family albums and Marnie tells him of her sister, Sharon and when she got pregnant and had the baby. Pictures of David as a child.
Marnie solves the mystery also of who's been sending the letters to Law.