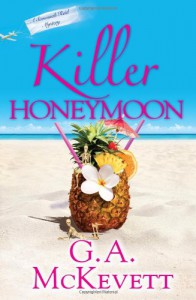 Killer Honeymoon by G. A. McKevett
Savannah Reid is finally married to Dirk Coulter and they are honeymooning on the island, Santa Tesla in a motel. The next day they get s surprise from John and Ryan and it's the rest of their honeymoon in the lighthouse keepers' cottage.
It's cozy and as they are looking out over the scene she notices a woman running, being chased and as they follow her she's shot at and dies in Savannah's arms in the water. The police on the scene are not on top of things as they walk all over the evidence.
The couple head back to the mainland for their weapons and the rest of the Magnolia Detective Agency-her relatives all agree to go to the island to help investigate the crime.
If anything could go wrong it does and then some. Funny at times and downright hilarious at other times while they are try not to step on one anothers' toes along with the police chief.
Love the story line and can't believe they finally got married! and love the details of the island. What a dream...but can they stay married.
They have many clues to follow up on to solve this one and a super surprise at the very end, touching!