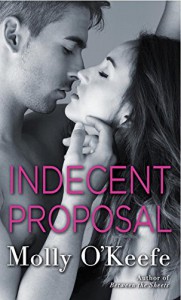 Indecent Proposal by Molly O'Keefe
Liked the summary so giving this book a chance. Starts out with Ryan who is a barmaid and she's noticed a blonde male who comes in, gets a Corona and says thank you. He's so into his phones that he doesn't notice his surroundings.
Excerpt for this night, he gets a Scotch and she finds out more information about him. Harry and she knows he's not a laborer from the feel of his hands.
His anger and grief draw her closer to talking to him....he just wants to help his sister...they end up having hot steamy sex for the one night stand... She wakes to a note that he can never see her again.
Story also follows Harry Montgomery and his sister had been kidnapped and he's made it possible to rescue her for the ransom. He is also running for the House of Representatives and can have no skeletons in his closet.
Problem is he hears from Ryan-she is pregnant...Harry has a solution for 2 years time. She and neighbors are bombarded with reporters and she must set things right...
Like how she handles his mother, puts her right in her place. Hot steamy sex scenes. She helps him with the political campaign...
I received this book from National Library Service for my BARD (Braille Audio Reading Device).