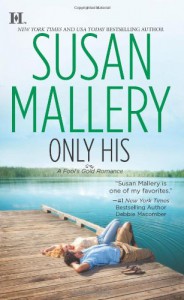 Only His Fool's Gold Series by Susan Mallery
Love the sound of this town, close to the city and in the heart of the mountains and country and wine vineyards nearby.
Nevada was trying to get the next site job. She thought she'd be meeting with the older man, not the son, who she had gone to bed with years prior.
Tucker doesn't know why she won't take the job, she finally agrees and it's so hard to keep business in the forefront because she wants to have sex with him.
Nevada is a triplet, Montana and Dakota are her sisters.
Ethan, her brother took over the family business, when their father unexpectedly had passed away just weeks ago.
He introduced wind turbines and was able to help put all of them through college, putting his education on hold.
This is the town where every main job is done by woman, it still astonishes me!
There is also a story of their mother, Denise. She has hooked up with a man her own age and after they hook up she has a crisis and breakdown because she feels she's betrayed her dead husband.
The building of the casino is in place and on schedule. They have to do some blasting which is new to Nevada.
It started with a kiss and then onto hot steamy sex.
Kat, who had gone out with Tucker 10 years ago is back in town. She is the famous metal sculpture and wants to give the town square a giant vagina.
artist. Kat shares another secret with Nevada.
After the explosion there is a problem that halts further progress on the casino.
Another story is when Jo tells Will of her past and he can't forgive her and move on, he wants to leave.
Nevada's sisters are to be married on the same day, same ceremony. Lot of work for a double wedding.
Love what they did rather than having the wedding cake, so unique.