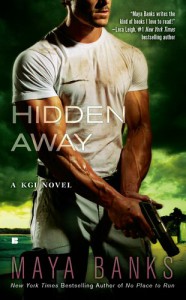 Hidden Away, released on March 1, 2011.
This book is about Garrett Kelly and the CIA wants him to get close to Sarah. Her half brother wants to find her and he's had a run in with Garrett.
Another KGI book, action, adventure military style. She's in hiding and it's for her life-she has seen too much...Sophie is about to give birth, she loves family time and cooking.
Garrett is recovering from steping in front of the bullet meant for Sofie. Hot steamy sex scenes.
Story follows Sarah as she's on the run...Love catching up with the others in the family and what's going on with them. When she has no choice and runs Garrett uses his resources to find her and convince her they need to go elsewhere to stay safe. Love that location also!
I received this book from National Library Service for my BARD (Braille Audio Reading Device).